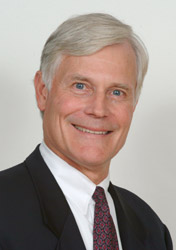 Robert H. Fairbank established Fairbank ADR in 2014 as an Alternative Dispute Resolution entity that specializes in the mediation of high stakes, complex civil matters. Fairbank ADR is the successor to Fairbank & Vincent, which Bob co-founded in 1996 after beginning his career as an associate and partner of Gibson, Dunn & Crutcher (1977-96).

From 2002-09, Bob served as an independent consultant for the Regents of the University of California in the Enron, WorldCom, AOL Time Warner, and Dynegy federal securities cases. He has also acted as counsel for Boards or independent committees of Boards of Mattel, Semtech, and Techniclone in the investigation or defense of threatened or filed derivative actions. His individual Director and Officer representations have included the Chief Financial Officers of IndyMac Bank, PFF Bank, Homestore.com, and Tenet Healthcare Corporation; Board members of La Jolla Bank, Vineyard Bank, and MetroPacific Bank; and officers of New Century Financial and Fidelity Federal Bank.

As an associate (1977-84) and then partner (1984-96) at Gibson Dunn & Crutcher, Bob had extensive experience in “bet-the-company” cases, including a successful antitrust jury trial for defendant National Gypsum, the successful defense of the first two nationwide conspiracy/medical malpractice trials involving National Medical Enterprises (now Tenet Healthcare Corporation), and a series of successful trials throughout the country in defense of Farmers Insurance Company in one of the first insurance industry hostile takeovers.

Bob has been an adjunct professor at Stanford Law and Business Schools (2007) and USC Gould School of Law (2004-present), teaching a seminar titled “Corporate Fraud.” He is also the co-author of California Practice Guide – Civil Trials and Evidence (The Rutter Group), the leading treatise on California civil trial practice.

Bob has served as the Co-Chair of the Lawyer Representatives to the Ninth Circuit Judicial Conference (2001-02), and the past president of the Association of Business Trial Lawyers (1989-90). He was also a member of the Judicial Council’s Bench and Bar Committee on Local Rules and served as Chair of the Civil Trials Subcommittee (1990-92).

Bob received his A.B. from Stanford University, his M.L.S. from the University of California, Berkeley, and his J.D. from New York University, where he served on the Law Review. In 1995, he was recognized by the first “Law Who’s Who” in Los Angeles Business Journal, which features the 100 most prominent business attorneys in Los Angeles.